Because we’ve been a tiny bit bored of endlessly scrolling through our Twitter feeds for updates on the Mayoral contest, we thought we’d get artsy about analysing the two main contenders’ speeches to their party conferences last autumn. The result: word banks. Obviously. 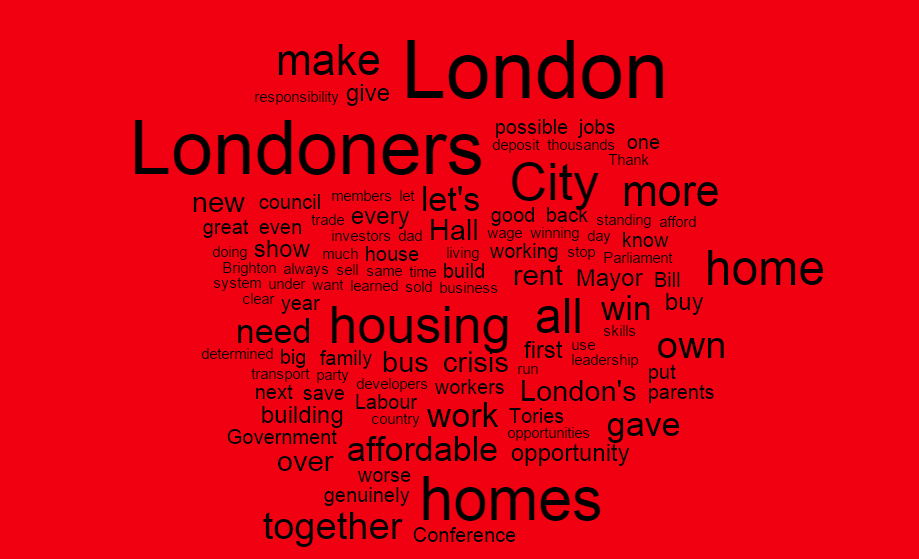 Here are 7 things we have learned by looking at these word banks:

Somewhat predictably, Zac’s most referenced word was London. But it’s interesting that in Sadiq’s speech, ‘Londoners’ is almost as predominant. And while Zac’s campaign slogan is the punny “standing up for a Greater London”, Sadiq’s references his bid to be the People’s Mayor – ‘A Mayor for all Londoners’.

Given Sadiq’s careful avoidance of mentioning Jeremy Corbyn, internal differences in Labour policy, or in fact anything apart from his own campaign in interviews, it’s not surprising that Zac’s speech mentions ‘party’ much more often than Sadiq’s.

Both speeches tell us in no uncertain terms that what London needs is ‘more’ – likely more homes, as ‘home(s)’ and ‘housing’ occupy the top spots in both.

There is one high-profile word in Zac’s speech that Sadiq does not use – capital. And while Zac uses this word in his speech only to refer to London as the capital city, not ‘capital’ as such, it looks like Sadiq doesn’t attribute much importance to the fact that he is running for Mayor of the UK’s capital city.

6. What did Zac Goldsmith’s dad do?

While Sadiq uses the words ‘dad’ and ‘bus’ undoubtedly to refer to his media-friendly family backstory (just to clarify – his dad was a bus driver), Zac’s choice of words is not particularly informed by his personal background.

7. Raise your hand if you want affordable housing

Reflecting one of Labour’s key lines of attack on Tory housing policy, Sadiq uses the word ‘affordable’ more often than Zac. (To illustrate this socialist credential, we have made Sadiq’s background bright red. You’re welcome.)